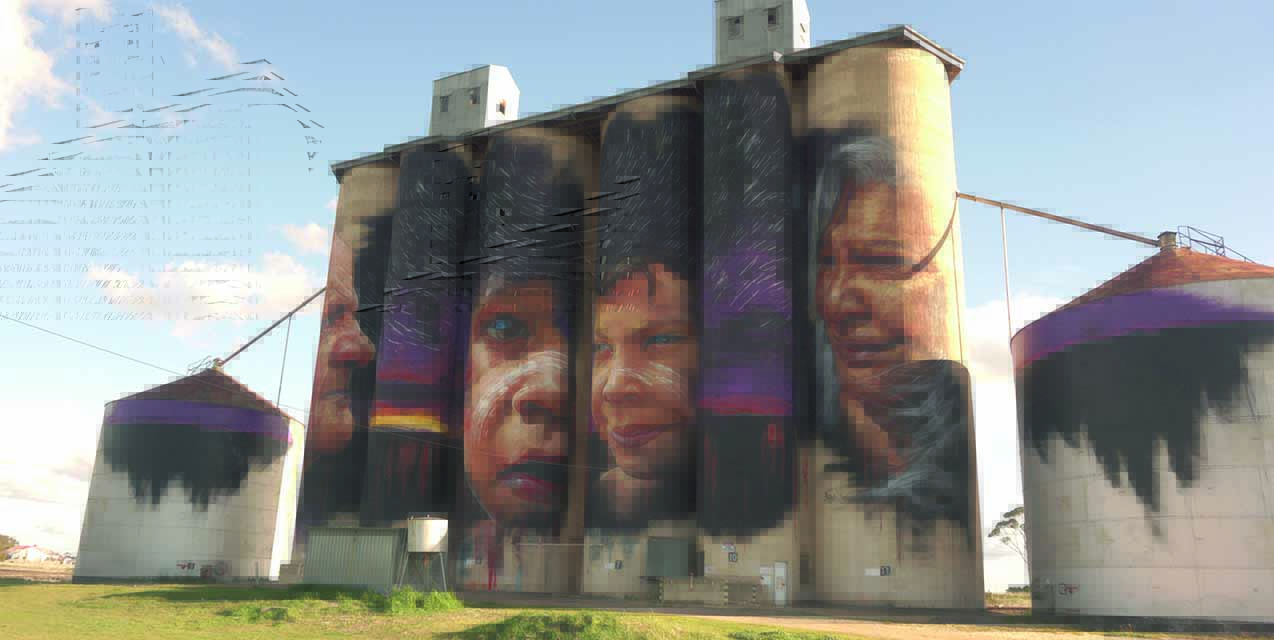 Out of the earth, four mighty concrete silos rise, crowd together overshadowing any building close to them. In front of the silos, backdropped by a brilliant blue winter sky, a modest caravan and car are parked and dwarfed by the storage giants. The door to the caravan is open and a woman is sitting on the step with a cup of tea in one hand and a vanilla slice in the other – oblivious to the enormity of creativity staring down at her. My, how the country drive has changed.

This is the second stop along the Silo Art Trail that snakes through the wheat belt of Victoria in Yarriambiack Shire. The inspired outdoor gallery begins a couple of hours drive north west of Ballarat.

The concept of having the towering (up to 27m), cylindrical concrete towers as the canvas for murals started with internationally renowned artist Guido van Helten’s stupendous ‘Farmer Quartet’ in the tiny town of Brim in 2016.

Shaun Hossach and Guido van Helten are the ideas men behind this cohesive venture and did it for next to nothing. They approached the local community and shire council and pitched the idea of its benefit to the drought-suffering region. The State and Federal Government put $200,000 each into the venture and the Yarriambiack Shire and Grain Corp put in $50,000 each.

“We knew we were on to something special and we invited some of Australia’s best artists: Rone, Matt Adnate and Fintan Magee to work on the silos to define the characters of the farming community and to honour the history of the silos. The entire community became engaged in the massive artistic endeavour,” Hossach says.

First stop heading north on the 200km trail is at Rupanyup with a double modern silo decorated by Russian artist Julia Volchkova.

Next stop at Sheep Hills is a four-silo effort by Matt Adnate of children of the local indigenous clan. 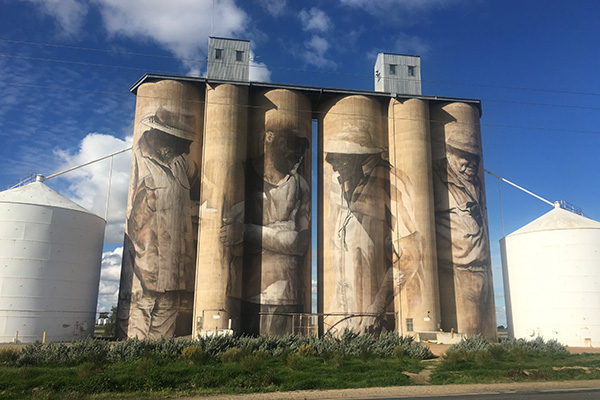 The vision is almost overwhelming with the subtle hues of the landscape blossoming into four characters of the region humbly portrayed. Real people modelled for this and are the modest celebrities of the shire.

Further into The Mallee, in Lascelles is the two-silo artwork by Rone (nom de plume of Tyrone Wright) based in Melbourne whose work is known internationally.

“I used 200 litres of house paint on my two subjects,” says Rone. “They were reluctant to model at first but they said if it helped the district, then they were happy to do it.” In the mellow, sandy tones of the silo Geoff and Merrilyn Horman, fourth-generation wheat farmers, curve around the soaring towers.

Top of the trail is at Patchewollock – a town of dwindling prominence that is the most isolated on the trail. Fintan Magee from Brisbane chose a subject from the only pub in town on his first night in Patchewollock: farmer Nick Hulland - a reluctant pinup.

Other work for the Silo Art Trail is by super talented Katie Kaff-eine.